Natural wells were and still are greatly prized in limestone districts where, even in the rainy season, streams quickly disappear through fissures in the rock to run underground until hopefully they reappear at a lower level. The Great Orme was no exception, large quantities of water were required for copper mining purposes as well as for domestic and agricultural use. The following Great Orme wells are known and most still supply running water: 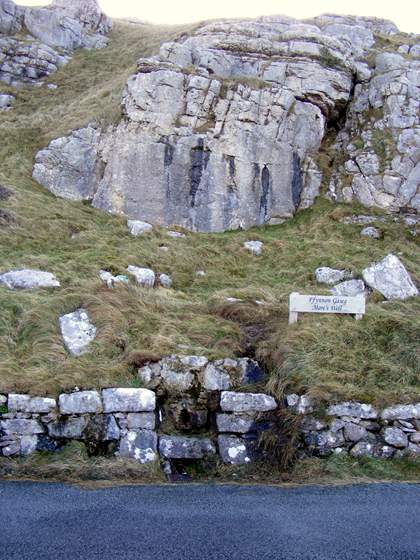 Ffynnon Galchog
In Welsh, ffynnon means fountain, well or spring and galchog translates as lime. This well, near Mynydd Isaf, to the north of Pen Dinas, is a source of lime rich water known for its petrifying qualities - hence its name. It is also one of several wells known to have been used in the washing of copper ores during the bronze age and later.
Ffynnon Gaseg

This spring, see photograph at left, was found during the construction of the Marine Drive in the nineteenth century, about half way round and near the highest point. It was thus ideally situated to refresh the horses on that five mile carriage drive round the base of the Great Orme, hence its name, Gaseg means mare.  Earlier in 1863 it had been noticed as a site where pre-Roman miners had washed  large quantities of copper ore.

This was the main water source for the Bishop of Bangor's palace at Gogarth and for the farms in that manor. Much later, in the eighteenth and early nineteenth centuries, it became the power source to operate the famous Tom and Gerry pumping engine. This machine by means of a long series of chains and Brammock rods up and over the hill for 1,300 yards and then 250 yards down the mine shaft to work the mine water pumps at the shaft near the summit above Pyllau farm.

A spring of water is located in Ogof Llech, the hiding cave on the headland, very difficult of access and claimed to have been used as a hermitage by Saint Tudno a sixth century monk of Bangor-is-y-coed. He was the first monk to preach the Christian faith to the inhabitants of the Great Orme.

Possibly one of the wells supplying the needs of the once populous farming community at Gogarth before much of the land was lost to coastal erosion.

Translated Roman Well, it takes its name from the tradition that Roman copper miners like their bronze age predecessors used its waters to wash the copper ores mined nearby Also, Roman coins have been found near the well.  An older name for the well is said to be ffynnon lletyr Madoc - the well of Madoc’s lodgings.

Situated beyond the road, near the north-east corner of St Tudno's church, ffynnon Tudno was, together with ffynnon Powel and ffynnon Rufeinig, a principal source of water for the community settled around the church.

Translated the well of the house at the pool, this spring, located on level ground at the foot of the Great Orme on its southern side below the Haulfre Gardens was used extensively for washing copper ores during the bronze age.  The site was examined in early Victorian times, but is now completely built up and in part covered by Seilo chapel at the junction of Arfon Avenue and Gloddaeth Avenue.