This is Britain’s only remaining cable operated street tramway and one of only three surviving in the world. Operation of the Great Orme tramway differs from the famous and unique San Francisco system in that, like the Lisbon lines, it is a street funicular, where the cars are stopped and started by stopping and starting the cable.  The tramway has been carefully and systematically renewed between 2000 and 2005.  This page provides links to many other sites offering views and insights into this remarkable survival. 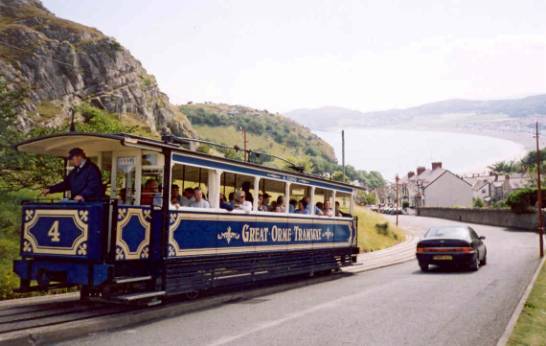 Car No. 4, ‘St. Tudno’, built new in 1902,
ascending the interlaced tracks above the passing loop in Ty Gwyn Road
on the approach to the Halfway Station.

Links to other sites compiled by Noel Walley: