THE SAINTS OF NORTH WALES 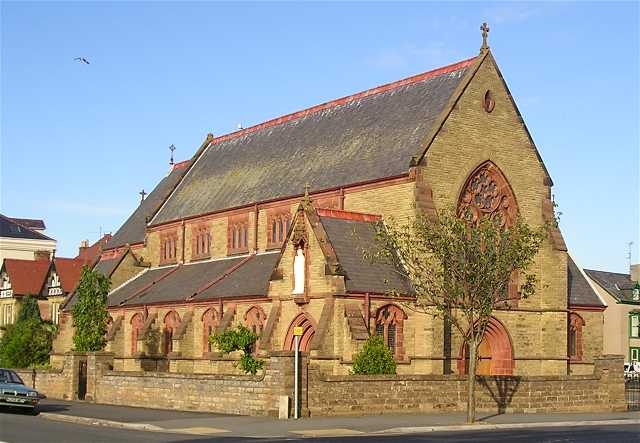 with the Irish Sea on one side and the estuary of the River Conwy on the other. The beautiful Church of 'Our Lady Star of the Sea' (in the Catholic diocese of Wrexham)was built in 1893 to serve the growing Catholic population in the area and 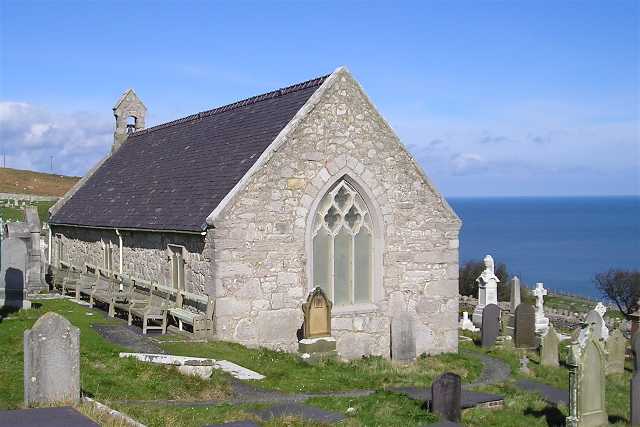 There are more pictures of Saint Tudno's Church at St Tudno's website. The following history is from 'The Growth of a Parish - Glimpses over a Century', the Centenary booklet of 'Our Lady Star of the Sea' researched and written by Margaret Amiel and Sister Madeline Dunphy, published in 1993.

Since the Reformation there have been few records of Catholic households and the Priests who served them. English influence was very strong in the area, especially along the road to Holyhead, the main route to and from Ireland. Here the law was rigorously enforced which made it difficult for a Priest to minister to his people. Priests had to move secretly from one Catholic household to another and the penalties for discovery were cruel torture for the Priests themselves and also for the households who gave them food and shelter. Consequently many of the landed families drifted away from the practice of their religion, anxious to show their loyalty to the Crown, and safeguard their estates, by conforming to the latest wishes of the Queen.

It was here in Llandudno that Blessed William Davies worked. Father Davies was born in Croes yn Eirias, which is now part of Colwyn Bay. In those days it was a small hamlet included in the parish of Llandrillo yn Rhos. He was ordained Priest at Rheims in 1585 and was sent almost immediately, at his own request, to serve in the mission in North Wales where he knew the need for Priests was very great and where he was well aware of the dangers he faced. He had many friends in this area, people who had known him since boyhood, but, of course, the very secrecy of his movements means that few records are available of the families he served. However, it is known that he was a friend of Robert Pugh of Penrhyn and it is also known that they were linked together in an interesting and important event on the Little Orme.

From May 1586 life became even more difficult for Catholics. The Queen was incensed to learn that laws against 'recusants and obstinate persons in religion' had not been enforced. The local Magistrates were accused of negligence and ordered to condemn forthwith the unlawful assembly of Catholics. This was an order that could not be ignored, even by Magistrates sympathetic to Catholics, but a friendly warning was given to Robert Pugh and William Davies and they were able to escape, taking refuge, along with several others, in a cave on the Little Orme. They remained there in comparative safety for about nine months and even managed to produce a small book on a printing press they had hidden there. The book was ‘Y Drych Christianogawl’ – ‘The Christian Mirror’ and its importance lies in the fact that it was possibly the first book ever printed in Wales. In April 1587, the cave was discovered and the local Magistrate, Sir Thomas Mostyn, informed. He went to the cave with a large band of people but did not enter – preferring (so it was said) to wait until the following day. He left several of his own men on guard, but when morning came – it was found that all the cave dwellers had managed to escape!
.
Nothing more was known of Robert Pugh and William Davies until five years later, in March 1592, when they were arrested in Holyhead, Angelsey. They had gone there to assist four student Priests on their journey to Spain, but all six persons were arrested – Robert Pugh being the only one to escape. The others were thrown into Beaumaris Castle dungeons where Father Davies regularly said Mass. Beaumaris rapidly became a centre for all the Catholics of Angelsey.

William Davies was convicted at the next Beaumaris Assizes of being a Priest, but popular feeling was so strong in his favour that he was removed to Ludlow, where attempts were made to represent him as having conformed. When these attempts failed, he was sent to several other prisons, before eventually being returned to Beaumaris to be tried again. At the Assizes he was sentenced to death and put in the 'Black Alley' in Beaumaris Castle. When the day of his execution came, the deed had to be postponed until men from Chester could be hired to carry out the sentence. Not one person in Angelsey would have anything to do with it! William Davies was butchered on July 27th 1593, and parts of his body were affixed to the castle gateways of Beaumaris, Conwy The chapel in Beaumaris Castle, Anglesey, and Caernarfon.

By the 17th Century the Creuddyn Peninsula (site of present day Llandudno) was almost the last refuge for Catholics in Caernarfonshire, but in spite of great bravery, fierce determination and great devotion to the Faith, Catholic families were simply not able to continue to support each other and their Priests in the face of such terrible oppression, and so the restoration of Catholicism in North Wales lapsed; for the time being it slumbered, awaiting the advent of more tolerant days when Priests and laity might once more openly celebrate their Faith.

The three hundredth anniversary of the martyrdom of Fr. William Davies occurred just days before the dedication of the present Llandudno Church in August 1893. Much later, in 1987, the re-organisation of the Llandudno Catholic schools occurred at the time of the Beatification of the English and Welsh Martyrs. Among them was the local priest, Blessed William Davies, and it was decided as exceedingly appropriate to name the new school after him. It was a great joy that on the occasion of the beatification ceremony His Holiness Pope John Paul II gave a personally signed blessing to the new school.

There is today very great co-operation between the Churches of Llandudno, which regularly come together under the banner of 'Cytûn' meaning 'of one accord' as the Churches together in Llandudno.