The geology, wildlife, archaeology and landscape of the Great Orme (Pen-y-Gogarth) on the Creuddyn Peninsula is of such importance that much of the headland has been designated a Special Area of Conservation, a Site of Special Scientific Interest and a Heritage Coast. It is managed as a Country Park and Local Nature Reserve by Conwy Countryside Service, which employs a Country Park Warden and also organizes study programmes and environmental activity walks for schools throughout the Llandudno and Conwy areas. The Geology of the Great Orme area is the subject of an article in the Open University Geological Society Journal. Particular geological features include the Limestone Pavement. 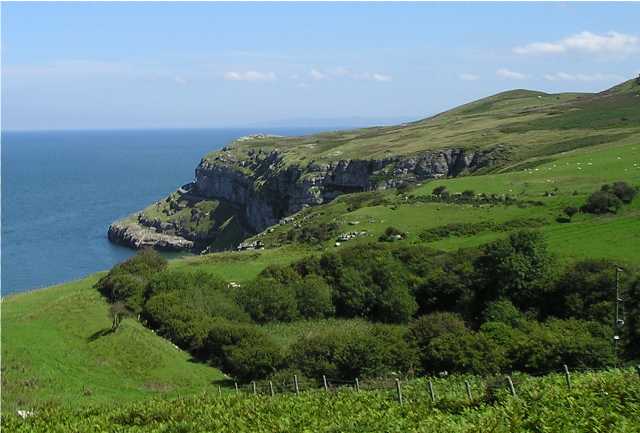 The Country Park is much visited by naturalists, and is the habitat of several endangered species of butterflies including the Silky Wave, the Grayling and the Silver-studded Blue. About half the Great Orme is in use as farmland including most of the land contained in the above photograph taken from the road near St Tudno's Church. The wooded rectangle in the foreground of the photograph encloses a former reservoir built by Llandudno U.D.C. towards the end of the 19th century.  The Great Orme is reported as the northernmost known habitat for several ‘southern’ species of spider including Segestria bavarica. The cliffs are host to colonies of seabirds (such as Guillemots, Kittiwakes and Razorbills as well as Gulls) and also to Ravens and Little Owls. The Great Orme is also home to over 100 resident and migrant birds including Peregrine Falcons. 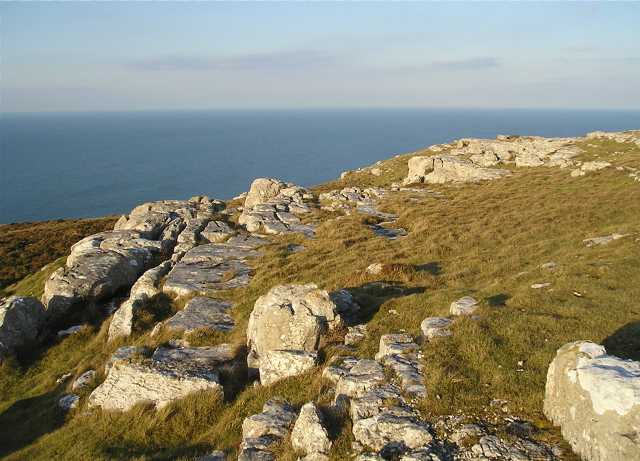 For over 100 years the Orme has been home to a constantly growing herd of over 150 Kashmiri Goats and here are a couple of fine specimens grazing at the side of the Marine Drive in November 2006. 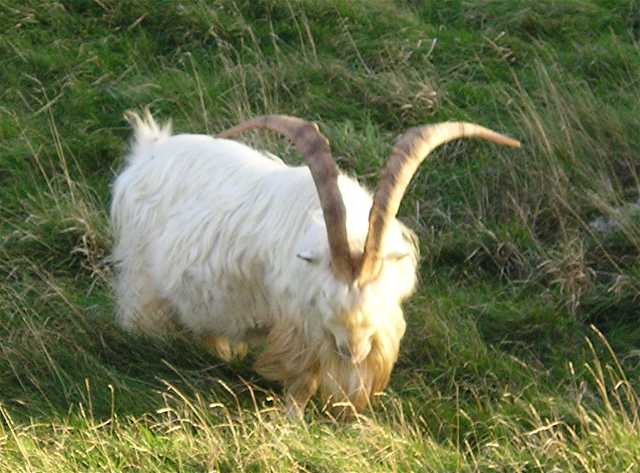 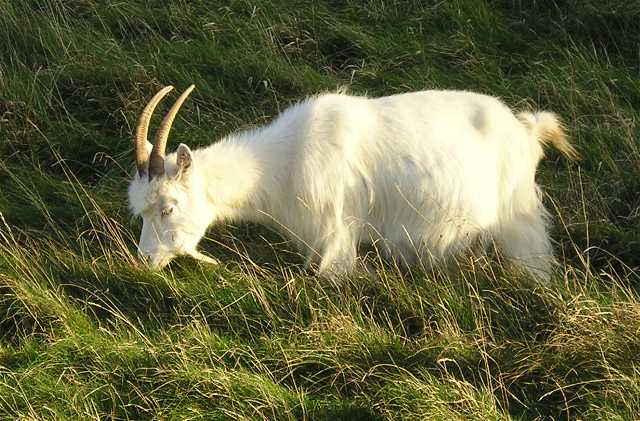 The Edwardian Tramway and the feral goats co-exist easily as shown by the photographs below where over 40 were present in one large group. There are many species of wild flowers and shrubs on the Orme including the vibrant 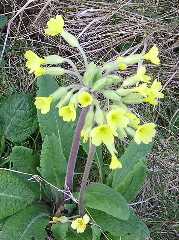 Great Orme variety of the common cowslip pictured here. The rarest is probably the ‘cotoneaster integerrimus’ which is unique to the Great Orme and grows only in remote corners of the headland, see also Flora and Fauna and the Creatures of the Night. The parkland occupies over half the total area and much of the rest is enclosed farmland mainly stocked with sheep. Sheep also roam on the hillside within the Country Park.

The Great Orme is the subject of a CADW Management Plan, under preparation with Conwy County Council in conjunction with the Gwynedd Archaeological Trust, which has recently identified through aerial photographs, significant remains of mediaeval ridge and furrow farming as well as further 19th century copper mining activity.

The Great Orme was the scene of considerable industrial activity as recently as the 19th century when several hundred men were engaged in copper mining. A team of miners worked for eight years from 1834 excavating an horizontal adit through solid rock at Pen Morfa to reach the base of the deep shaft at Vivian’s copper mine in order to release a column of water 198 feet deep and provide an easy route by which copper ore could be brought to the shore for sorting and grading prior to being shipped to Amlwch and other ports for smelting. The adit still drains the mines and, with its continuation ditch, can still be seen at the west shore near the model boating pool made on the site of the copper ore sorting pens.

The Great Orme Exploration Society (GOES) was set up in 1985 by a group of people interested in the exploration and interpretation of the mines on the Great Orme. A photographic record of their explorations is presented on their website. The Society arranges a number of walks each year in the summer on Thursday nights, everyone is welcome. Generally each walk lasts approximately 2 hours and is of an easy nature. These copper deposits are particularly rich, and mining started in the Bronze Age. The pre-historic workings, claimed to be the oldest and finest copper mines in the world, are the subject of very considerable archaeological activity. Significant sections of the old Bronze Age mines have now been excavated and may be visited at the internationally famous Great Orme Copper Mines. Nearby, at the end of Cromlech Road are the exposed stones of Llety’r Filiast, a Neolithic Burial Chamber dated c 3,000 BC.  Click for photographs including ‘Hwylfa’r Ceirw’, an ancient double row of stones near St. Tudno's and other archaeological features. More photographs and artefacts are at the Llandudno Museum. 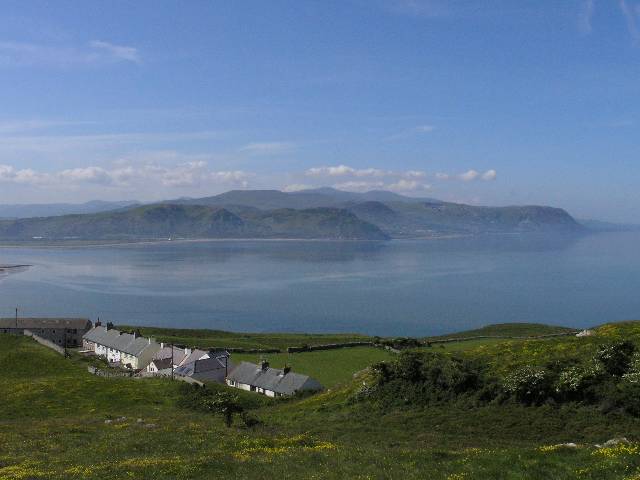 Visitors to the Great Orme travel in a remarkable number of ways. Those with time on their hands or youth on their side travel on foot and this is quite the best way to reach all parts of this wonderful headland. Some even climb the very difficult coastal bits with ropes and crampons. Others engage in cave exploration. Still others have approached the Great Orme ‘from the sea’ or as ‘shipwrecks’.

Those who enjoy Victorian and Edwardian transport systems will travel to the summit by the Great Orme Cable Tramway (one of the three surviving cable operated street tramways in the world – the other two are in San Francisco and Lisbon). Others will travel to the summit the Alpine way using the modern Aerial Cable Car built 1969 and operated to the Summit Complex from a site in Happy Valley. The Great Orme is also served by a public bus service to the Tyn y Coed housing estate and the tramway halfway station.  The Summit Visitor Centre adjoins the tramway station and the Summit Complex and is well worth a visit. The Summit Complex is built on the site of the old ‘Telegraph Inn’, built in 1827 by the Trustees of Liverpool Docks as an optical telegraph station to monitor shipping on the approach to Liverpool.  Also near the summit is the disused Bishop’s Quarry with extensive fossil deposits.

Travellers by car are also well catered for by the four-mile Marine Drive (on which motor coach trips with vintage vehicles – circa 1954-56 – are regularly operated).  The Summit Car Park has a combined fee with the Marine Drive of only £2.50 per day or just £15 for an annual season ticket, which is good for visitors and great value for residents.  To see a map of the Great Orme, click  MAP. Long established features of the Marine Drive include the deservedly popular ‘Rest and be Thankful’ café at the halfway point.  Perhaps suitably refreshed, take the road to the left a hundred yards after the café, which climbs steeply to a  wartime coastal lookout and viewpoint.  The first passengers to travel round the marine drive did so in a horse drawn carriage and near the highest point on the marine drive is a well called the mare's well at which the horse could also be refreshed. Click Great Orme Wells for photograph and details of the other ancient wells.  Click Caves and Coast for more about the coastline. 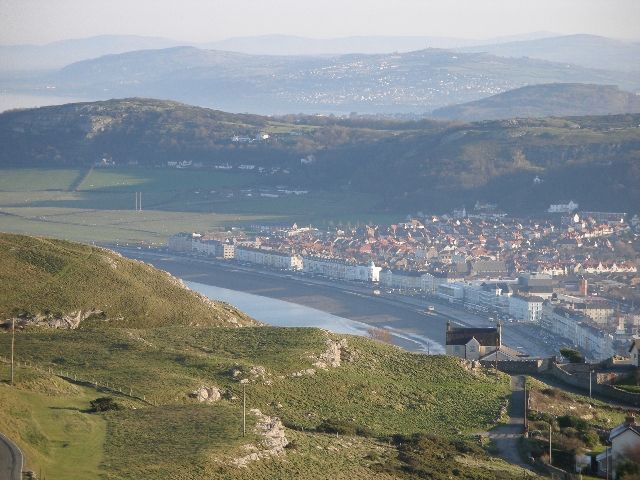 Also reached from the Marine Drive is Saint Tudno’s Church.  There are several carparks, many ever changing coastal views and miles of public footpaths by which to explore the Great Orme.

Below, is the famous GREAT ORME CABLE TRAMWAY and over forty of the remarkable Kashmiri Goats photographed together near the halfway tram station.

More photographs of the Great Orme are on the Marine Drive, the Great Orme Wells, the Caves and Coast and the Saint Tudno  pages and also on the Llandudno Town Trail pages, especially the following: