The Pier and the Marine Drive

The pier had its origins in a much shorter pier of just 242 ft built on 16 wooden piles and opened in 1858 by the St George's Harbour and Railway Company.  Unfortunately, that pier was severely damaged in the great storm of October 25th, 1859, and although repaired and used for a further 16 years, the pier was too short and could only be used by steam ships at high tide.

The present pier, built for the Llandudno Pier Company by Walter Macfarlane of Glasgow using iron castings from the Glasgow Elmbank foundry, was opened to the public on August 1st, 1877. The land wards extension to the same design, still in deep water and also supported on iron columns, was opened in 1884 and a new landing stage was added in 1891.


The pier is a Grade 2 listed building. It is the finest recreational pier in Wales and one of the best in Britain.  It is unusual in that it has two entrances, one on the Promenade at Prince Edward Square and the other, the original entrance in Happy Valley Road as these pictures show. 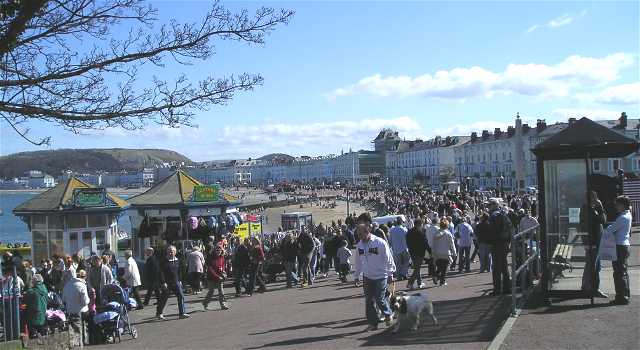 The pavilions on the left mark the entrance from the promenade to the pier.
(photographed Easter Sunday 2006)
The pier was delighted to have received the "pier of the year" award for 2005. 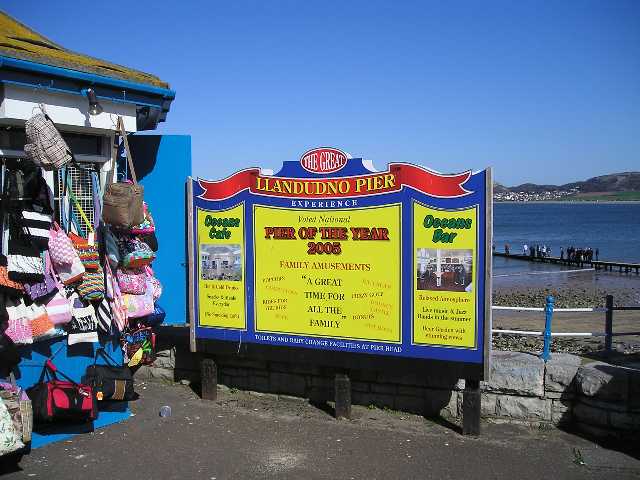 Between the two entrances is the Grand Hotel.  Llandudno Pier is often chosen for Victorian
and Edwardian filming locations and notably for the recent TV production of the Forsyte Saga. 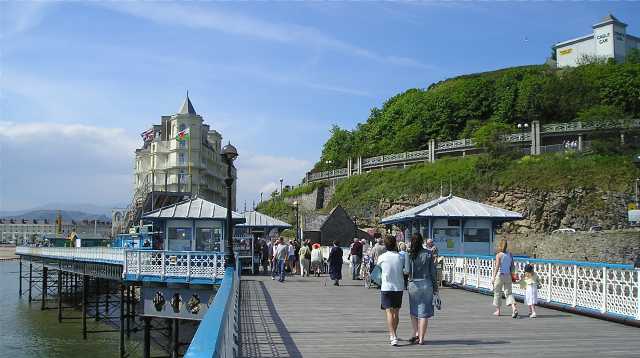 On the Orme side is Happy Valley Road leading to those gardens and also to the Marine Drive.
Above is the popular colonnaded walk that enters the Happy Valley gardens at a higher point.
At the top is the Aerial Cabin Car Station from which passengers take the mile long journey
to the summit of the Great Orme in four-seater cabins. 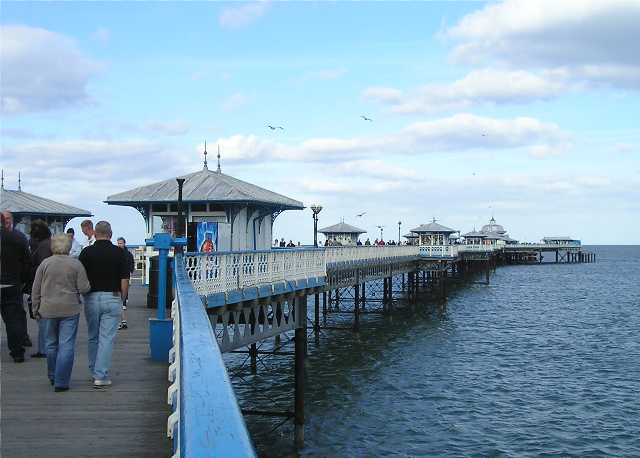 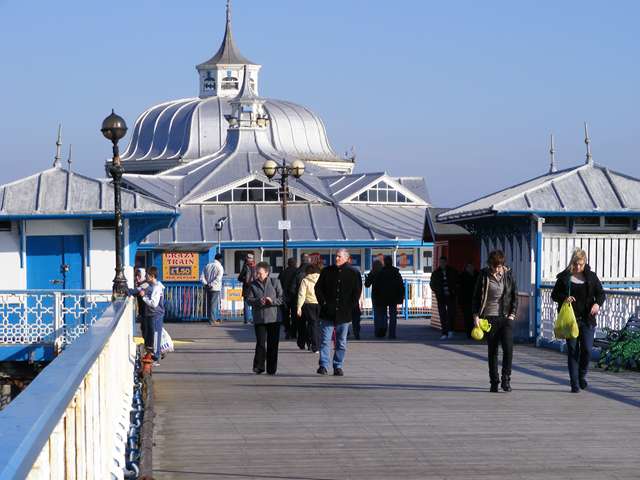 The pier head in February 2008 with winter visitors enjoying crisp air and bright sunshine
- plus tea, coffee and light lunches at the pier head Oyster Bar.

Below is the original entrance to the pier. From there to the seaward end is 1,200 feet.
The 1,000 ft extension, on the seaward side of the Grand Hotel, to Prince Edward Square
was built in 1884. to provide a grand entrance from the promenade. 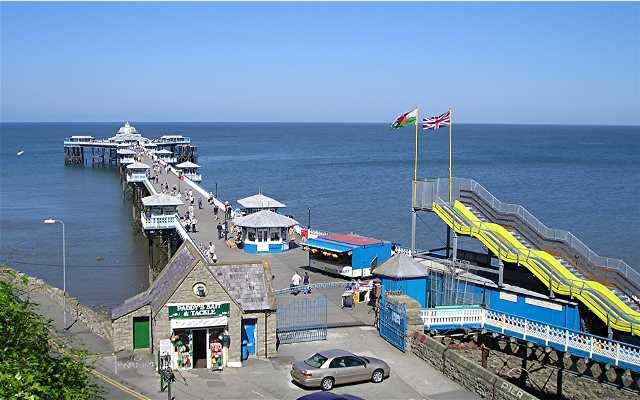 This 2,295 foot pier, the longest in Wales and greatly admired by Sir John Betjeman, is probably the finest pleasure pier in Britain. A British Tourist Authority report in 1975 said of it…. ‘It zooms out of the sea ….in a spectacular Indian Gothic style rather like a Maharajah’s palace floating on a lake. Cast iron, brackets of iron lace work, an outstandingly pretty balustrade like an enlarged fish net, ogee roofs curling  away to the sky, all add up to a totally pleasurable experience.’ The pier company maintain their property well with fresh paint work and fine wooden decking, much of which has been renewed in recent years.

The landing stage, which was rebuilt in concrete and steel in 1969, was used regularly until 1982 by the Isle of Man Steam Packet Company for excursions to Douglas and occasionally since. It is also used from time to time by the Waverley and Balmoral Steamer Preservation organizations for more local excursions - click the link below. 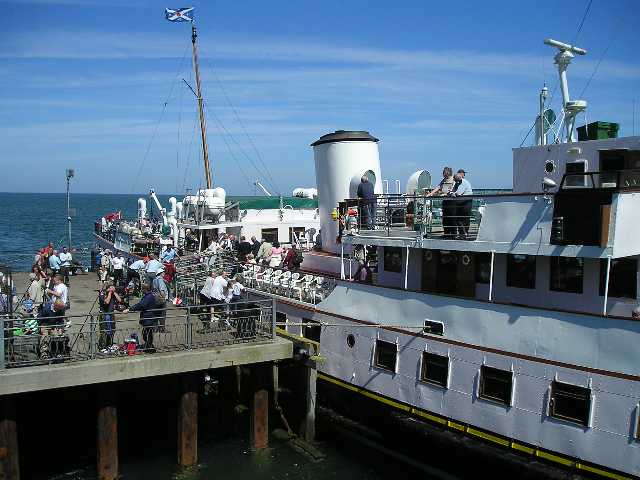 The landing stage is also a favourite with anglers.
Bait, rods and lines can be bought from 'Paddy's Bait & Tackle' at the gate. 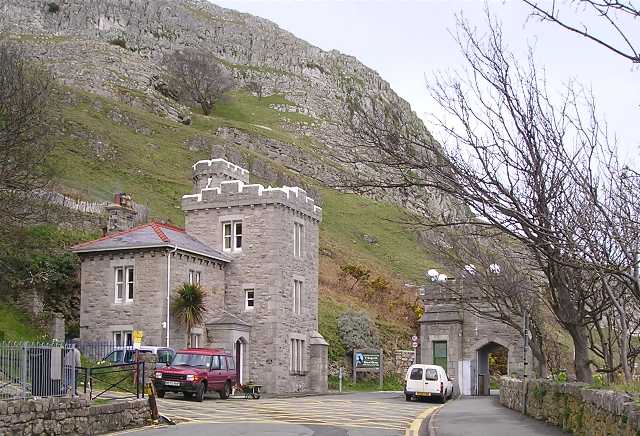 The Marine Drive is entered through the Eastern Toll Gate but the Town Trail having reached the gate turns back left upon itself to enter the Happy Valley Gardens. 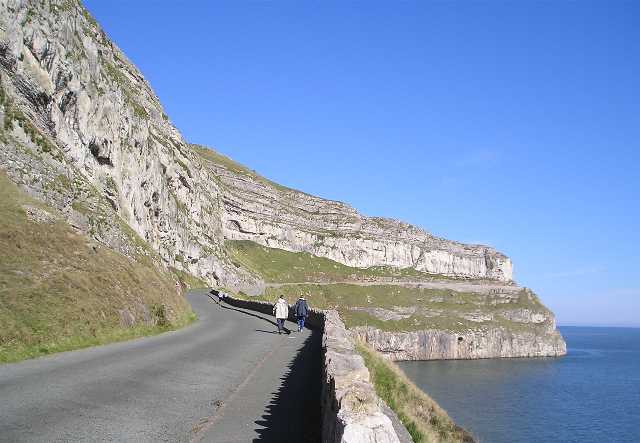 The Marine Drive is a four mile scenic drive round the Great Orme headland to Llandudno's West Shore and it has much to offer.  The charge is about £2.50 per car and that includes parking on the Orme and at the Summit Car Park.  Drive slowly, its one way only for the first three miles so you shouldn't meet anything, and enjoy spectacular views at every turn - many places to park - stop often and look up and down.  Even better, it's a grand walk at any time of year.