The West Shore is Llandudno's quiet "blue flag" beach. With a children's playground, it is the place for family picnics on the grass or the sand dunes. A few residential or licenced hotels and a beach cafe, all worthy of a visit. 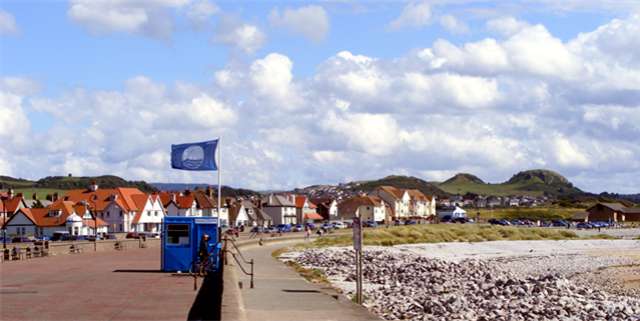 Blue Flag Beach - 2008 - The twin humps of Deganwy Castle are in the background. 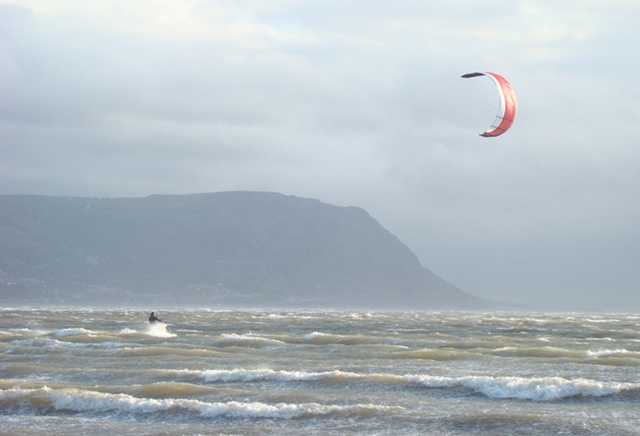 But not just a sandy blue flag beach, the estuary is an all-weather favourite with wind surfers!
(photograph © Elwyn Jones, May 2009) 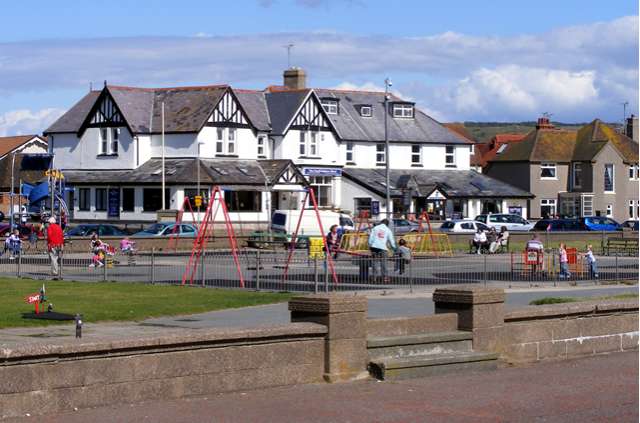 The Sandringham Hotel with the children's playground at the end of Gloddaeth Avenue
and just across from the beach and large grassed play areas on each side.


It is at the West Shore that one finds an excellent model boating pool and a delightful piece of sculpture in honour of Miss Alice Liddell (1852-1934) for whom Lewis Carroll's famous children's stories "Alice's Adventures in Wonderland" and "Alice through the looking glass" were named. She was the second of the five daughters of the Very Revd Dr Henry Liddell, Dean of Christ Church Oxford and Vice-Chancellor of the University of Oxford. 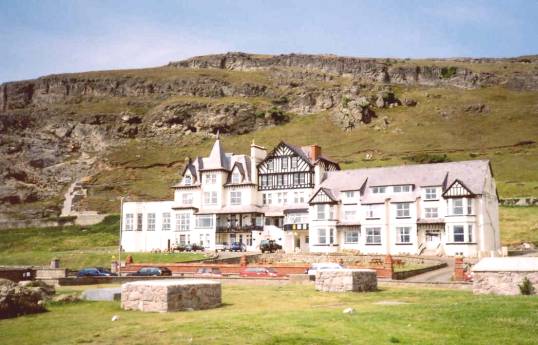 From 1861 to 1873, the dean and his family were the summer and Christmas residents of the house, which he had built at Pen Morfa. Later and much extended it was for many years known as the Gogarth Abbey Hotel, but in 2002, still a hotel, and recently refurbished, it reverted to its original name 'The Pen Morfa'.  The hotel ceased trading and closed down in 2006 and planning permission granted for the property to be rebuilt as residential accommodation. Rebuilding work involves the demolition of several extensions made to the building during its time as a hotel.  The developers original aim was to retain the centre block, seen below in this February 2007 photograph, which was the original Pen Morfa, although even that had been much altered over the years.  However, the developers later applied for planning permission to demolish these remains of the original house, which without its supporting wings was unstable.  Demolition took place in November 2008.  New construction on the site has not yet started.

The Revd Charles Lutwidge Dodgson (Oxford Mathematician and Anglican Deacon) and the son of the Vicar of Daresbury in Cheshire was a colleague at Oxford of Dr Liddell and a regular visitor to their Oxford home. Although a profound stutterer, Dodgson had a natural gift for story telling and captivated the three eldest of Dean Liddell's daughters with ‘Alice’s adventures underground’ – these he later published together with a sequel 'Through the Looking-Glass' under the pen name of ‘Lewis Carroll’ and dedicated to Alice with the original title modified to ‘Alice's Adventures in Wonderland’. 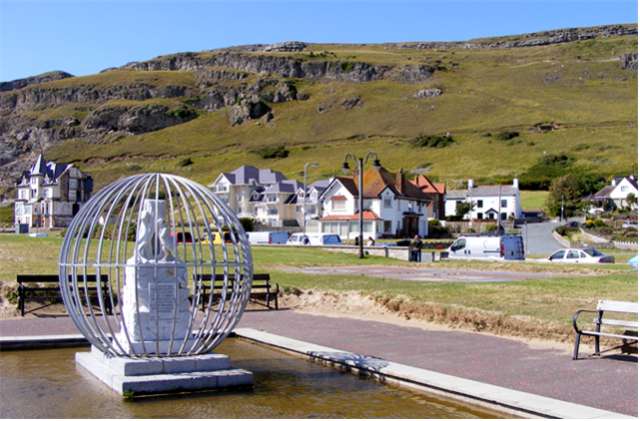 Llandudno has always been very proud of the ‘Alice Connexion’ and in 1933 the Rt. Hon. David Lloyd George O.M., the former Prime Minister and MP for Caernarvon visited Llandudno to unveil the famous "White Rabbit" memorial. This very small and delicate sculpture in carved marble is very easily damaged and in recent years has, already damaged, been protected by an ugly cage. 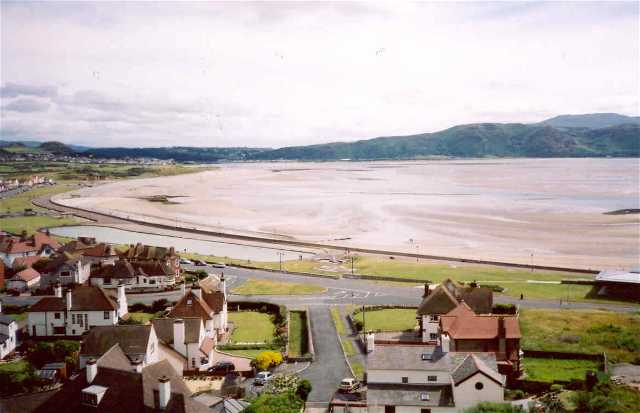 The Conwy estuary and the west shore with its wide promenade and model boating pool viewed from the hillside public footpath from the Haulfre Gardens. In the foreground, below the surviving miner's cottage, is the walled ditch that links the adit from the Great Orme Copper Mine to the boating pool on the site of the sorting pens. 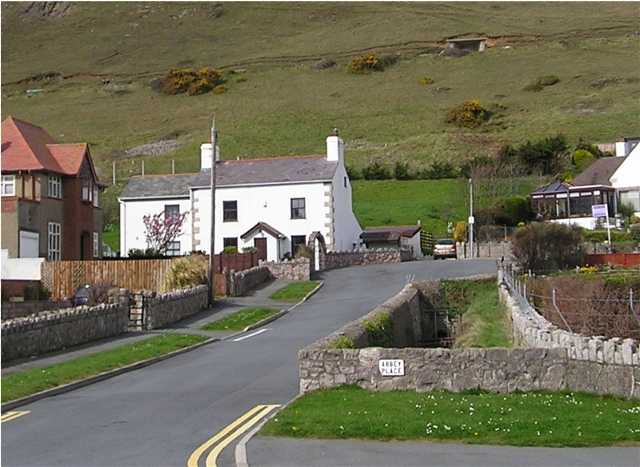 The drainage adit was dug by a team of 12 miners and took eight years. It was completed in 1842 and was fitted with a tramway to carry ore to the settlement ponds and copper ore sorting pounds that prior to 1881 occupied the foreshore where this boating pond was built in 1896. Copper was exported from the beach in small boats. The adit was lined with large pipes in 1997 to prevent rock falls and preserve its vital drainage capabilities. The adit and its Abbey Place ditch still supplies the West Shore boating pool below with fresh water throughout the year. 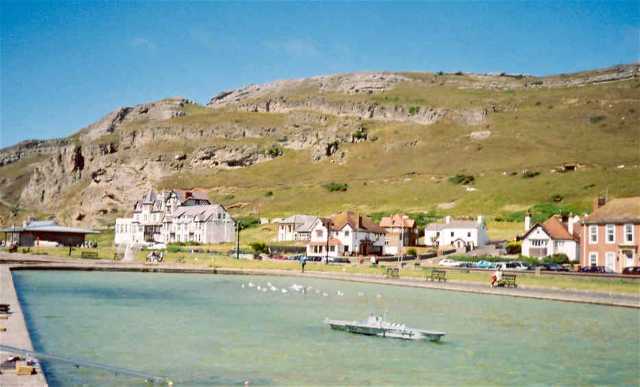 The radio controlled model ship doing mock battle with the seagulls is a fine model of an aircraft carrier, the HMS Victorious, seen more recently in close-up below.  For more pictures of model boats and yachts, please click: 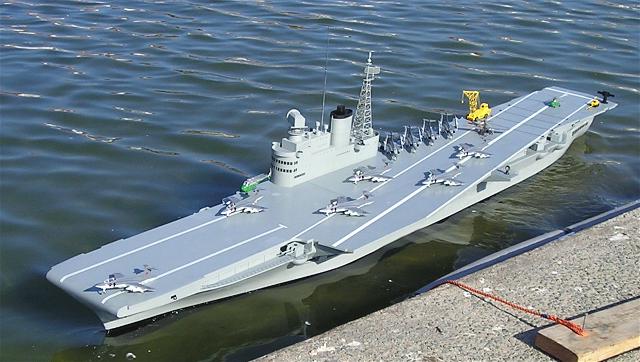 There is much more to see and do at the West Shore, Llandudno's quiet beach, now quite popular for water sports and of course there are unrivalled views across the Conwy Estuary and further afield to Puffin Island and Anglesey. 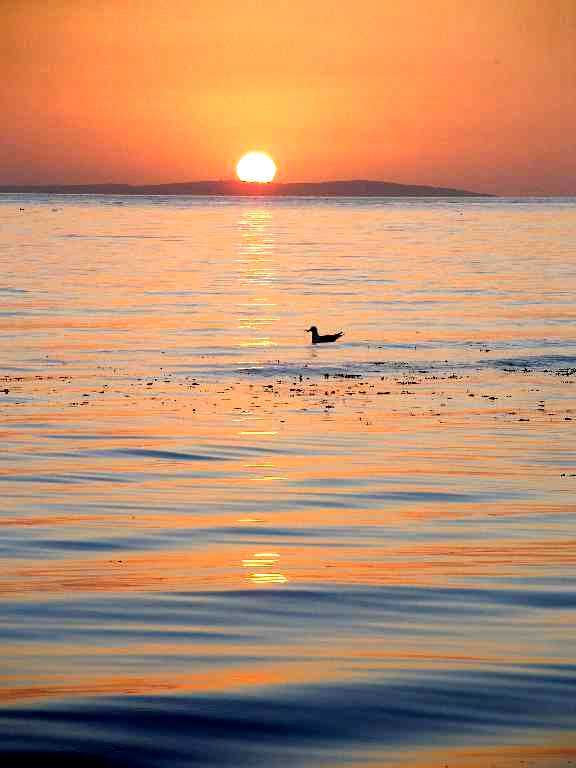 The West Shore is noted for its sunsets and the sunset over Anglesey depicted above was taken at the West Shore by my good friend Elwyn Jones on August 27th 2005.

In the next picture, the line of the paved footpath from the Haulfre Gardens can be clearly seen on the hillside, it passes behind the Pen Morfa Hotel with its Alice in Wonderland connexions to reach the Marine Drive at the former Toll Gate.  The footpath is very well provided with benches and there are several shelters, one of which, seen in the next photograph, is located directly over the adit down one side of Abbey Place. 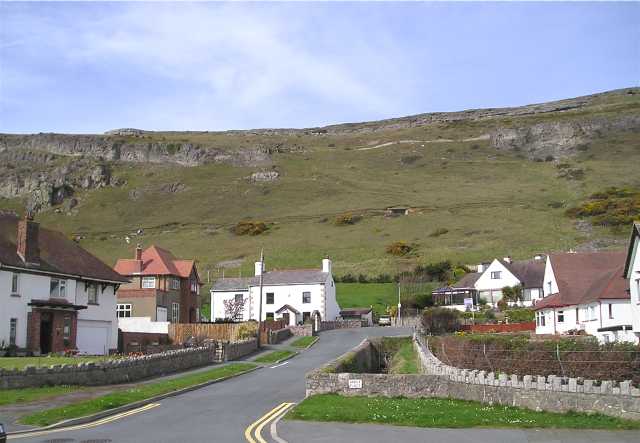 Abbey Road is home to Saint David's Hospice, the Loreto Convent and the Loreto Retreat and Conference Centre. Above is Abbey Place, a short cul-de-sac leading to private houses including the remaining miner's cottage but do look over the wall into the culvert leading from the adit, which still drains the Great Orme Copper Mines. 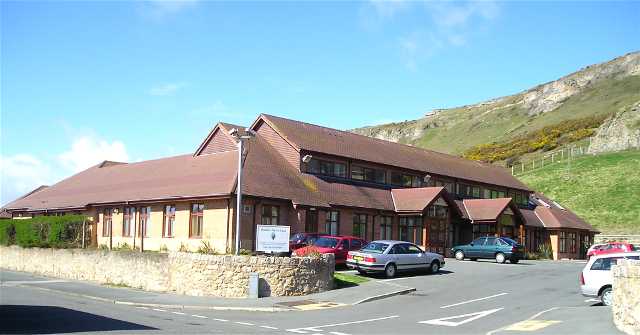 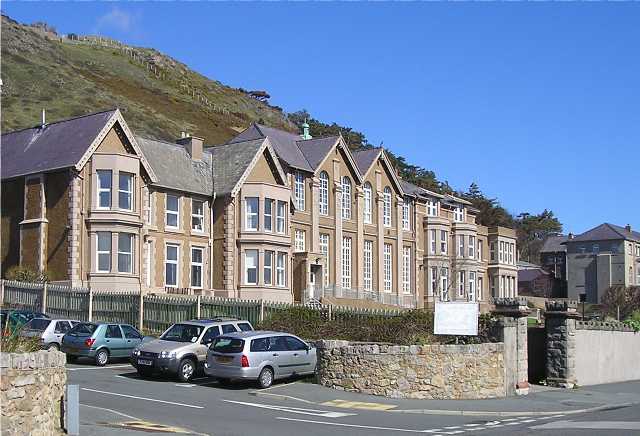 The Loreto Retreat and Conference Centre and beyond the Loreto Convent.


There is a choice of routes between the west shore and Llandudno town centre's 14th trail marker on Gloddaeth Street.  Perhaps the easiest is straight down Gloddaeth Avenue.  This is the route taken by the Llandudno Lifeboat on the occasions when it is launched from the west shore. 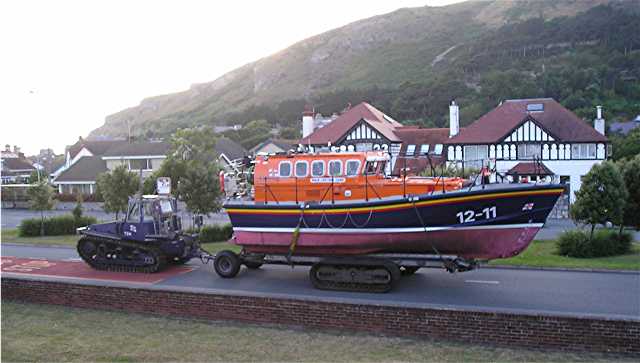 The Haulfre Gardens are on the Orme side set in trees that are seemingly just behind these houses in Gloddaeth Avenue - but actually Abbey Road and Church Walks are in between. Occasionally, as in February 2004, there is a little snow in Llandudno.  Just two or three inches produced this enchanting landscape: 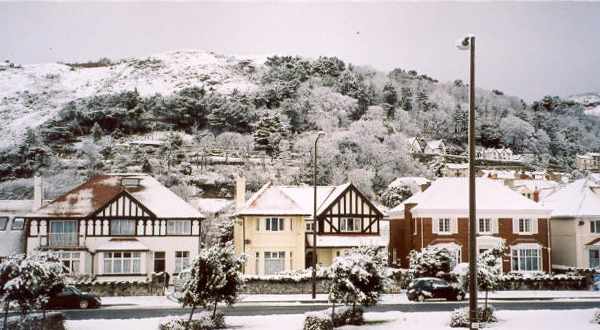 ..... NEXT
HOME - Llandudno Queen of the North Wales Resorts